OnePlus just took the wraps off their highly anticipated 2017 flagship, and it’s only natural to wonder how the latest and greatest from OnePlus compares to the other high-end smartphones out there. In this post, we go hands-on and give you a quick look at the OnePlus 5 vs LG G6!

OnePlus has made significant design changes with the OnePlus 5, and the reaction to the new look has been divisive to say the least. There’s no denying that the OnePlus flagship shares a lot of similarities with the iPhone 7 Plus and even more so with the recently-announced OPPO R11. Regardless of how you feel about that, it has to be said that that the OnePlus 5 is definitely the most premium feeling flagship from the company yet. With its sleek full metal unibody, it’s also the thinnest smartphone released by OnePlus, with a thickness of just 7.25 mm.

The LG G6 is definitely the more unique looking of the two, with ultra-thin bezels along the sides of the display that also comes with rounded corners to provide better impact protection. However, the metal and glass combination is increasingly common, with phones from Samsung, HTC and others featuring similar build materials.

Despite the slightly larger display, the LG G6 is the more compact of the two smartphones, which is a testament to what great job LG has done to keep the bezels thin and leave the front free of any capacitive or physical keys.

Speaking of the display, the LG G6 comes with a 5.7-inch screen with a Quad HD+ resolution, while OnePlus sticks with a 5.5-inch display with a Full HD resolution. This is another polarizing decision on the part of OnePlus — even though 1080p more than gets the job done and there are certainly some benefits in terms of battery life, it’s not wrong to expect or want a Quad HD screen from your flagship phone. That’s particularly true given that the OnePlus 5 is not as affordable as its predecessors.

Where the OnePlus 5 does have a leg up is when you take a look at what’s under the hood. OnePlus has always offered the latest and greatest in terms of specs and this device is no different, coming with a Qualcomm Snapdragon 835 processor and either 6 GB or 8 GB of RAM. Both options are more than the 4 GB of RAM you get with the LG G6, and LG has also decided to stay with the Snapdragon 821 as the processor. Of course, this setup is still very capable and performance is not an issue at all with the G6, but it’s still an odd choice nevertheless.

32 GB and 64 GB are the built-in storage options available with the G6, while the OnePlus 5 comes with either 64 GB or 128 GB, which also dictates how much RAM you are getting. However, the G6 does support expandable storage via microSD card. Another great feature of the G6 that the OnePlus 5 does not have is the IP68 rating for dust and water resistance.

In terms of battery, both smartphones come with 3,300 mAh units. The battery life of the LG G6 has been quite impressive, and we can expect even more from the OnePlus 5 because of its lower resolution display and more power efficient processor. Of course, we’ll only know for sure once we conduct our battery tests with the OnePlus 5.

Both devices support fast charging, but while the Qualcomm Quick Charge 3.0 with the LG G6 is fast, OnePlus’ upgraded Dash Charge offers impressive charging speeds, with OnePlus promising that you can get a full day of use after charging the phone for just half an hour.

The biggest change with the OnePlus 5 is when it comes to the camera. The device features a dual camera setup on the back, with one 16 MP sensor with an f/1.7 aperture, and another 20 MP telephoto lens with an f/2.6 aperture. OnePlus says this is the highest resolution dual-camera system on any smartphone. The OnePlus 5 camera is central to the phone’s marketing message, and we are definitely excited to run it through its paces.

Related: OnePlus 5 vs the rest: what’s the best Android camera?

LG has its own take on the dual camera system, with the G6 featuring two 13 MP units on the back. The standard lens comes with a f/1.8 aperture, while the wide-angle lens unit comes with a f/2.4 aperture. The cameras of the LG G6 are excellent and are capable of taking breathtaking photos, and it will be interesting to see how the OnePlus 5 fares against the great smartphone cameras we now have in comprehensive comparisons.

The OnePlus 5 is running OxygenOS based on Android 7.1.1 Nougat. As it’s always been the case, there are a lot of customization options here, but with a minimalist approach overall. New software features include a Reading Mode that uses gray-scale mapping and a blue light filter to provide a reading experience similar to what you get with an e-reader. Other notable features include automatic Night Mode, expanded screenshots, a Do Not Disturb gaming mode, and a whole lot more.

The LG G6 is running Android 7.0 Nougat with the latest version of the LG UX on top. LG has continued to clean up their software experience to provide a more minimalist interface. LG’s own apps have also been updated to take advantage of the 18:9 aspect ratio of the display which is also perfect when it comes to split view multi-tasking. LG has worked hard to optimize its software package and that really shines through with the smooth performance that we see.

As far as pricing is concerned, the higher-end variant of the OnePlus 5 is priced at $539, while the one with 6 GB of RAM and 64 GB of storage will set you back $479. On the other hand, the price of the LG G6 ranges from anywhere between $600 and $720 depending on the the color option and whether it’s unlocked or from a network carrier. While the price of the OnePlus 5 does push closer into high-end pricing, it still remains the more affordable choice among current generation flagships.

So there you have it for this quick look at the OnePlus vs LG G6! When choosing between these smartphones, it really comes down to what you are looking for from your smartphone experience. The LG G6 has the advantage of a Quad HD display, water resistance, and a more unique design, while the OnePlus 5 offers a superior processing package and a more affordable price point. The camera of the G6 is fantastic and we’ll have to see how the promising OnePlus 5 fares in this regard. In any case, you aren’t going to be disappointed with either smartphone.

Want to learn more about the OnePlus 5? Check out our full review! 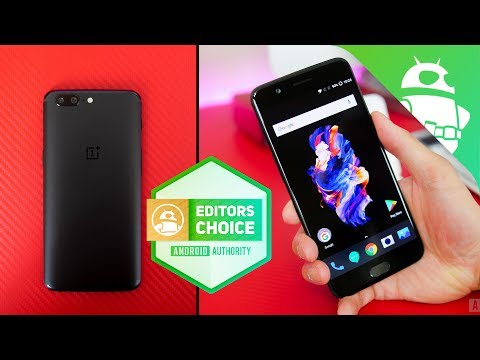