2017 is proving to be the year when everyone brings their A-game to the smartphone industry, and OnePlus is no different. In case you missed it, OnePlus has officially announced its 3T successor, the OnePlus 5.

While the OnePlus 5 is the most expensive smartphone the company has ever made, the spec sheet is still quite impressive for a phone in this price range. But as we’ve found with other smartphones, there’s more to a great experience than just specs.

I’ve been using the Galaxy S8 for the past couple of months, and I recently switched to the OnePlus 5 for about 72 hours to help with Android Authority’s review. I know 72 hours isn’t a ton of time to get acquainted with a phone, but I thought I’d give you my thoughts on the device so far.

Without further delay, here are one Galaxy S8 user’s thoughts on the OnePlus 5.

I won’t rehash the specs here, but looking at the spec sheet, the OnePlus 5 can absolutely compete (and surpass, in some cases) the Galaxy S8 and S8 Plus. The OnePlus 5’s Snapdragon 835 processor, Adreno 540 GPU, and 6/8 GB of RAM certainly deliver on their promise of offering a smooth and snappy experience overall. The S8 is quite the powerhouse too, with its Snapdragon 835, 4 GB of RAM, and 64 GB of storage. The S8, however, offers expandable storage via microSD, which is a feature you’ll have to live without if you choose the OnePlus 5.

Even with 30 apps open and running in the background, the OnePlus 5 didn’t slow down a bit.

Even with 30 apps open and running in the background, the OnePlus 5 didn’t slow down a bit. Many smartphones start slowing down a bit once you load up your data and open apps, but I never noticed the OnePlus 5 slow down once.

Our battery tests take longer than 72 hours, so I couldn’t run them in time for this piece. However, over the three days I’ve used this phone, battery life seems to be impressive. You can check out Lanh’s full OnePlus 5 review for a closer look at the battery.

Once your battery dies, though, you’ll be happy to hear that OnePlus’ Dash Charge has made a return. And boy is it fast! OnePlus says a 30 minute charge is enough to get through a whole day of use, and I’d say that’s about right, at least in my experience thus far.

The OnePlus 5 could hold an LTE connection much stronger than any other phone I’ve used.

One major difference between these two devices that I’ve noticed is that radio reception seems much stronger on the OnePlus 5 compared to my Galaxy S8, especially when it comes to LTE connectivity. In terms of data speeds, both phones are on par, though I found the OnePlus 5 could hold an LTE connection much stronger than any other phone I’ve used. For example, many phones drop LTE connectivity when riding in an elevator in my building in San Francisco. The OnePlus 5 not only held it, but showed full coverage. Granted, this isn’t a scientific test at all, though it’s impressive nonetheless. Simply put, if you live in an area with spotty cell coverage, the OnePlus 5 could solve a lot of those problems.

Let’s get the cat out of the bag – the OnePlus 5’s dual camera looks like the iPhone 7 Plus camera and acts a whole lot like it too. The regular 16 MP sensor is backed by a 20 MP telephoto sensor which offers 2x optical zoom as well as up to 10x digital zoom. The dual cameras also combine to offer a portrait mode with the data from the second sensor used to intelligently blur out background detail so only the subject is in focus. OnePlus’ new Fast Autofocus system uses the full pixel to quickly focus on a subject and definitely seems to be faster than on most phones which use Phase Detection Autofocus. 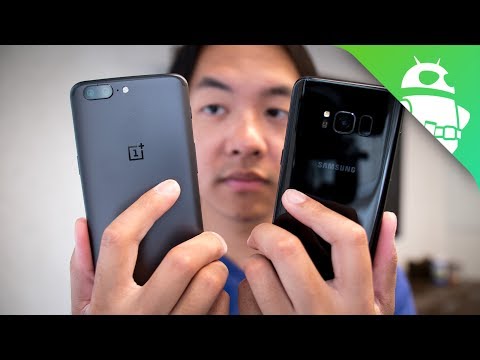 Images are rich, well-detailed and appear on the natural side.

In practice, the camera performs pretty well. Images are rich, well-detailed and appear more on the natural side versus other phones which prioritise saturation over color accuracy. The secondary telephoto lens allows you to take great close up and macro shots without loss of detail, while manual mode offers tons of controls for budding photographers. Low-light performance on the main sensor offers detail and accurate colors while video recording and Electronic Image Stabilisation provides a relatively smooth experience.

OnePlus 5 vs the rest: What’s the best Android camera?

How does the camera compare to the competition though? Head over to our best Android camera shootout to find out as we compare the OnePlus 5 to the Galaxy S8, LG G6, Pixel XL, HTC U11 and Sony Xperia XZ Premium! Stay tuned as we’re also bringing you a closer look at how the camera has improved versus the OnePlus 3T last year as well as portrait mode shootout between the iPhone 7 Plus, OnePlus 5 and the Huawei P10!

It’s common knowledge around the AA team that I’ve used TouchWiz for many years and have grown accustomed to, as well as learnt to live with, a lot of the quirks in Samsung’s software. The reason I like TouchWiz a lot is that it offers what I’ve come to expect from Android: tons of customisation, baked into the interface out of the box. That means no installing apps to do little things and while I wasn’t sure about OxygenOS, the software on the OnePlus 5 left an impression.

Yes, in some ways it doesn’t have quite the same plethora of options that TouchWiz has, but at the same time it’s super smooth and doesn’t seem to stutter like TouchWiz does in places. There’s no huge changes to the software this time around but there’s the usual array of improvements and from a first time OxygenOS user – well, technically second after my brief stint with the OnePlus 3T – the OnePlus 5 has me impressed. It contains most of what I’ve come to expect from TouchWiz in terms of features, but in a wrapper that’s buttery smooth and easy to use.

So close… yet so far

There’s a lot to like about the OnePlus 5 but there’s also a few things that I wish OnePlus had changed and the biggest of these is the display. With everyone adopting QuadHD and the Galaxy S8 sporting one of the best displays I’ve ever used, the Full HD panel on the OnePlus 5 seems like a step back. Even though it’s an AMOLED panel and boasts rich, vibrant colors and deep blacks, it’s a visible step back from the Galaxy S8. For most people, the OnePlus 5 display is going to be good and enjoyable but once you’ve used a Quad HD Super AMOLED, it’s hard to go back to something lower resolution.

The other big thing I wish that OnePlus had improved on was the design: in essence, the design of the OnePlus 5 is actually pretty similar to the OnePlus 3 or OnePlus 3T and that is rather disappointing. The OnePlus 5 looks no different to the Oppo R11 – or dare we say it, the iPhone 7 Plus – and it’s a shame that there’s been no major upgrades on the design front.

The OnePlus 5 looks no different to the Oppo R11 – or dare we say it, the iPhone 7 Plus

With that said, I love the little alert slider on the left of the phone as it’s a really simple way to flip between the various Do Not Disturb modes – Silent, Priority or Normal notifications. I’ve used the mute switch extensively on the iPhone as the fastest way to mute notifications during a meeting for example, and it’s nice to have a physical way to do so on an Android phone. Although it’s certainly not new, it is somewhat unique to OnePlus and has become a staple of their smartphone design philosophy.

Would I buy the OnePlus 5? Should you?

Overall, the OnePlus 5 is a curious smartphone. On the one hand, it’s exceptional value for money and it does a lot of things exceptionally well, but on the other, it doesn’t excite me as much as the Galaxy S8 does. That’s down to the display and design though, and for most people, the cost-savings over Samsung’s flagship will make the OnePlus 5 worthy of splashing out on.

Would I personally buy the OnePlus 5, I hear you ask? If I was to spend my hard-earned money on a phone right now, I do think it would be the OnePlus 5. The cost savings alone definitely make it a smartphone that many people should consider.

What do you think of the OnePlus 5 and do you plan to buy one? Let me know your thoughts in the comments below!

Check out our other OnePlus 5 coverage: